How's this for ironic...

jondoe in bitcoin •  2 months ago

Look up the definition of irony...

If you don't want to look up, there's not much better definition than what we are seeing play out right now between Elon Musk, Tesla, and BlackRock.

Way back when Tesla first bought bitcoin, they were pressured by one very large investor due to bitcoin's energy consumption and carbon footprint.

Guess who that investor was?!

Fast forward to today and BlackRock is partnering with Coinbase and launching a bitcoin trust. 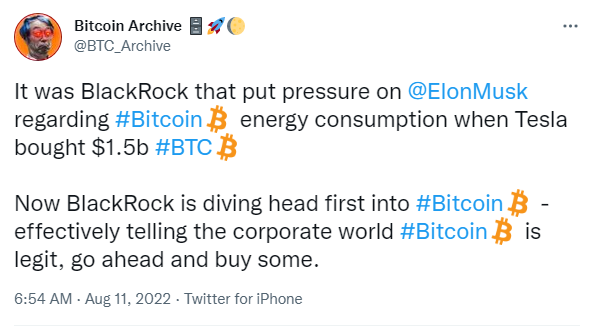 1557727038660038659) twitter metadata:QlRDX0FyY2hpdmV8fGh0dHBzOi8vdHdpdHRlci5jb20vQlRDX0FyY2hpdmUvc3RhdHVzLzE1NTc3MjcwMzg2NjAwMzg2NTkpfA== ~~~
bitcoin crypto news blurt life
2 months ago by jondoe
2.36 BLURT
2 votes
$0.01
0
Authors get paid when people like you upvote their post.
If you enjoyed what you read here, create your account today and start earning FREE BLURT!