blurt.one in blurt •  2 months ago

First of all, we really missed posting these updates, as dev @tekraze was busy somewhere else and was not able to make any progress. But now he is back in action, and we hope there might be more updates from him.

Also, he is still the official Developer for Blurt Official as well the alternate frontends.

So, let's see, what we have for now this time.

While editing a post, the summary entered was not shown. So, one can not see, what he entered, and can only add a new summary. But now that is fixed.

On the official Blurt.blog it was fixed by @saboin, but not on other frontends. So, now these changes are there and deployed to Blurt.Buzz

This feature was in discussion for a long, as @tekraze and @freakeao were discussing it with other people for their opinion. In fact, the feature was developed and deployed as a beta around 2-3 months before, but never was made public.
There were some issues going on with blurt.blog as well us at that time, so we have not made that live.

The current feature is also not final, and there will be iterations to it until we made it better based on feedback and opinions. 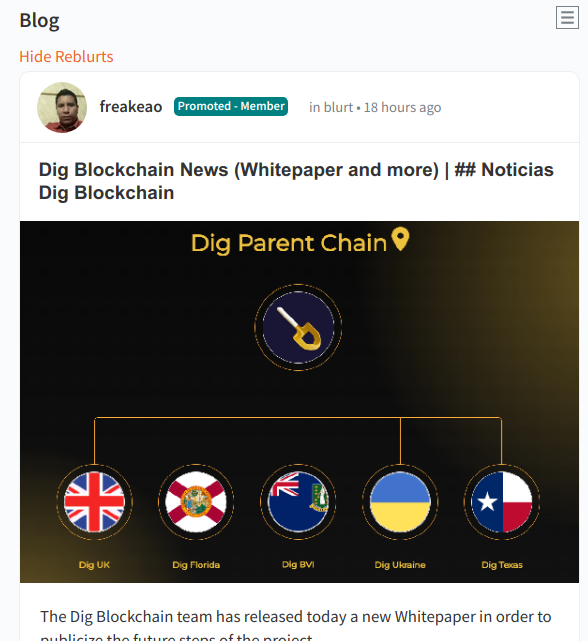 Here is a preview from Blurtlatam.

We have added some people to the list, and @freakeao with his team may add more.

Same as above for Blurtlatam

Preview of Feature on Blurt.one

This is all for now. We will keep posting more updates. Do share and vote to support the development and the developer too 😜

Note: If you have some frontend-related feature in mind, do let us know. We might give it a try if possible

Vote for our Witness - https://blurtwallet.com/~witnesses?highlight=blurt.one

Never went into dig but always looked like a great project

Yepp that's a promising one

So many are promising though , if i ever have time to learn about it , i might get in

I don't see tags fixed yet. I'm running #dcc initiative to curate content on blurt, but I can't find all the posts there and they have to comment me with a link in the contest. It's hard to catch up with all posts if the tag is not working.

Hi, we understand the issues, you are facing. Tags are related to the blockchain and currently, we do not have devs available. We will try to fix it in the upcoming months.

Follow @techclub for more updates and use tag #techclub for tagging content
you can also delegate to @techclub to support curation
0.44 BLURT
1 vote
$0.00
[-]
blurt.one  ·  2 months ago

Thank you very much @tekraze & @blurt.one May your dedication get positive results for the development of Blurt.

Hmm, this is all cool, numerous frontends guarantee accessibility, but an each should be unique in a way, would be more interesting.

Yes, we would be putting more features to the frontends

A few developments have been brought to the platform in recent days. I couldn't understand that. But now it's clear. Our hard working dev tekraze was busy in different life. Now we can hope for more developments.

Posted from https://blurt.one
0.00 BLURT
$0.00
[-]
blurthispano  ·  2 months ago
This post has been upvoted by @blurthispano.
We invite you to use the tag #blurthispano. You can find us on Discord.

We invite you to vote for @blurthispano as Witness.