tekraze in blurt •  2 months ago

Before I start, my last update way back 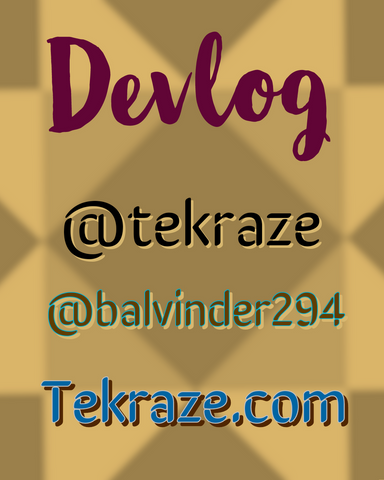 As you all know, my last update about blurt was back around June, not last month or this. It does not mean I have stopped working or left the team, it's just we discussed that we will post all updates from the @blurtofficial account only so, the updates are official. And anything coming from our personal accounts may or may not be official until we clearly define so.
This was done to keep personal and official views separate.

So, let's get back to what I did last month

The proposals were there from start but were missing the required function as well as controls on the interface. I worked on that so users can create proposals. As well as the user interfaces for listing proposals as well as the voters who voted. Saboin helped me on this as well.

Now everywhere there is a heart symbol in place of the old upvote icon that was there for a long time in graphene systems.
I changed that to heart icons, along with the animations for a heartbeat on hover as well broken heart for unvote case

Before when we click a link icon on a comment, it took us to the link page opened in a new tab with the comment as a parent post.
But now added a simple way to copy a link to the comment.

There was a bug with the wallet while doing a power down causing many user issues. I took the time to debug the issue and fixed that. It was a hard find though

The older modal only showed a limited number of voters. So, changed the UI and made it to show all the voters up to a max of 100 (only rare chance we see 100 votes) I still need to optimize the dimensions though, which I will do later, as already spent much time on that.

Updated the voting menubar that was way old before and showed numbers. Now a better UI and clear detail with an updated look and heart icon.

This was an issue that caused many users to complain, as every time when we do an update, users have to manually clear the cache.

But not anymore, as I found the issue and fixed it. The issue was that webpack did not generate unique resource files, so the browser believed the file has not changed.
But now every update will have the proper changes, as no need to manually clear the cache. It will be automatic

Mute Upgrade (Some call it super mute though)

To be true, mute was not my idea or anyone idea. It was already there from the start of graphene systems. Every platform has its own way of muting users.
In our platform, the muting was there but one to one and not one to many.
So, it mutes the person and we don't see him, but our followers on the post can.
This was actually a design flaw as the mute should take away the person disappears from the profile of the person muting.

Now it's fixed, and muted people can't comment or reply and even if they somehow do, they don't show up on the author's post if they are in the author's mute list.

Some alternate frontends have applied this, and some didn't.

Yeah, last time also we tried google ads, but some people don't like it as the ads were tracking data. So, we removed them. But now we have ads on the site that shows ads related to bitcoin and crypto and don't track. They are lightweight as well, so no slowing down the site.

So, now we have a new reblurt icon that is more appealing than the older one and in terms of visibility more visible.

I was still playing with the fonts, and they are still in testing. Once we reach a consensus on the standards and which one is good, we will apply them. Meanwhile, the fonts are the same

The default card layout is like way old and back to a time with less width. Now the blog mode width is extended as well.

Images were also increased in size, so they properly cover-up in layout

There was a small issue where the icons cut out the screen and may appear out of the margins. Added a fix to wrap them, so no cutout margins anymore.

But, because of the increased no of controls/icons, the layout just covers two rows. This I may replace with Icon in place of text next time.

Other than this many other small changes as well as fixing packages and code, can not be posted.

For the changes, anyone can check my git for commits

Still, we are on the same deal and updates will be coming from the official handle @blurtofficial but I may also post often here so you all know I am working.

With my last power-down people thought I am leaving the team, but not as the power down was to cover up for some of my expenses of mine. Some may say why power down?

So, simply it was what I earned working as a dev here and sharing posts and getting votes. If I would have not been working here, I would have been working somewhere else and at the same time, I might be getting.
So, I just used some of my stake and not all, I am still here.

if someone throws something at you that doesn't mean, you should also throw back on him.

There is an alternate way of

I know most of them are here more than I was, and I respect that. Some of them had bad experiences, and I also feel for them.
Some people here, I also tried to have conversations, some worked some not. But at last, we agreed, that we are limited to what we do and that not everyone is in control of their behavior.
The only thing we can do is to choose, with whom we want to interact and with whom dont. And sometimes, just with bad people as well, not because they will make you suffer, just because some are alone, some are in struggle, they just need someone to talk to.

So, I am here to talk, about something, that is important and not all, as if I only do conversations, who will be doing the dev work 😜

Well, I am late to tell this (as I was busy doing things as a dev rather than a blogger)

So, before, if you had 30K power with you, you can vote for all 30 witnesses with the same power.

This does not matter, whom you vote for. The only thing matters are that you vote, in a way, that it actually counts. If you just voting all, then that's not going to help anyone. Do think and vote wisely.

Thanks everyone. This is all for now

​You can support me by giving a vote to my Blurt Witness as I am doing dev work, Hosting an RPC, and now frontend.
If you really want me to be here on this platform, only your witness vote can help me, so feel free to do this by clicking on the below link

blurt devlog techclub coding blurtindia r2cornell
2 months ago by tekraze
1,222.11 BLURT
52 votes
$3.10
20
Authors get paid when people like you upvote their post.
If you enjoyed what you read here, create your account today and start earning FREE BLURT!
Sort Order:
[-]
blurtconnect-ng  ·  2 months ago
Hello @tekraze

Congratulations your post has been curated by @blurt-india .
Make quality posts and use our tag #blurtindia .

Thank you for all your work and dedication to Blurt.

Fantastic summary of development, thanks for the good work! Have created some Trello card for tweaking the voters modal so we don't forget.

Thanks, I will check, some other fixes, I am doing as well meanwhile.

You are an amazing dev. Thumbs up.
Thank you for all the developmental changes on blurt.

Thanks for your work!

I dont mind the ADs... even though everybody hates ads and I hate ADs but its okay.
I really love the font change and the UI width Nice job 👍

Thank you for doing all this excellent work. It is very much appreciated.

I changed that to heart icons, along with the animations for a heartbeat on hover as well broken heart for unvote case

I personally love this update!