Here I will get in to the Intrinsic Value of VKBT, the most simple definition of this Value could be called "Early Adoption", kind of a Bear Market Move, but not like Bear-Whale, more like Buying McDonalds stock in the 60s. The reason for this is BEE Token, how it works, and how HIVE works. Currently with the emergence of VKBT we can see kind of what could be called "the Politics of HIVE", and this is still the early Days. HIVE is not competitive with Facebook, or Twitter, it is kind of a Niche Platform. They would say Anarchocapitalist Niche, I would say Nerdy people misusing their own Technology. But let's not get too much into that, and instead look at the Mechanisms of how this works, because we are here. BLURT is under 5 years old, HIVE is under 10 years old, we are in the early Days of this, Facebook and other Platforms will have to start doing all of this not to compete with HIVE, but to retain use and Value, instead of just going on with the kind of Politics of the Platforms. I'm not talking about Elections, Republican and Democrat, I'm talking about like Business Politics, like the Art of War being used for Business Strategy type Politics, this is all happening even without the Sophistication, based on a kind of Seniority type thing going on that actually can be backed up with the Meritocracy Arguments, but is why VKBT is in such a good position.

To start off, if anyone wants more information about these Blogs and how this all works, here is a good place to start.
https://blurt.blog/blurtdallas/@vankushfamily/the-historical-setting-of-the-van-kush-beauty-token

The VKBT has been launched on HIVE-Engine with Support from the @dsc-r2cornell Team, and many of the Rewards are being Distributed within the #r2cornell community, probably the Bulk is within that Community as far as new Rewards. They have also been Buying up any cheap Tokens for Sale, which has not been too too many, which is a good sign early on meaning everyone is Staking what they have, and what the get, for the most part.
https://blurt.blog/r2cornell/@r2cornell/introducing-the-vkbt-token-and-of-course-photographs-presentacion-de-la-ficha-vkbt-y-por-supuesto-fotografias

If anyone wants to begin to understand VKBT or HIVE-Engine Tokens, SMTs, ScotBots, etc, more generally they can read these Blog posts and Bitcointalk Thread. This shows how all of this gets initiated, these posts are from the first Week after the Token was made into a ScotBot Smart Contract through TribalDEX.
https://blurt.blog/blurtdallas/@vankushfamily/vkbt-distribution-begins-at-9-30-pm-cst-07-25-22

This post is from about a year and a half ago, when VKBT was first created, this is important because of the Price of HIVE, and the Politics of HIVE, and what the #VanKushFamily is.
https://blurt.blog/blurtindia/@punicwax/hive-engine-currencies

If you look at when HIVE was $3.00, it was the sane time VKBT was first Announced. 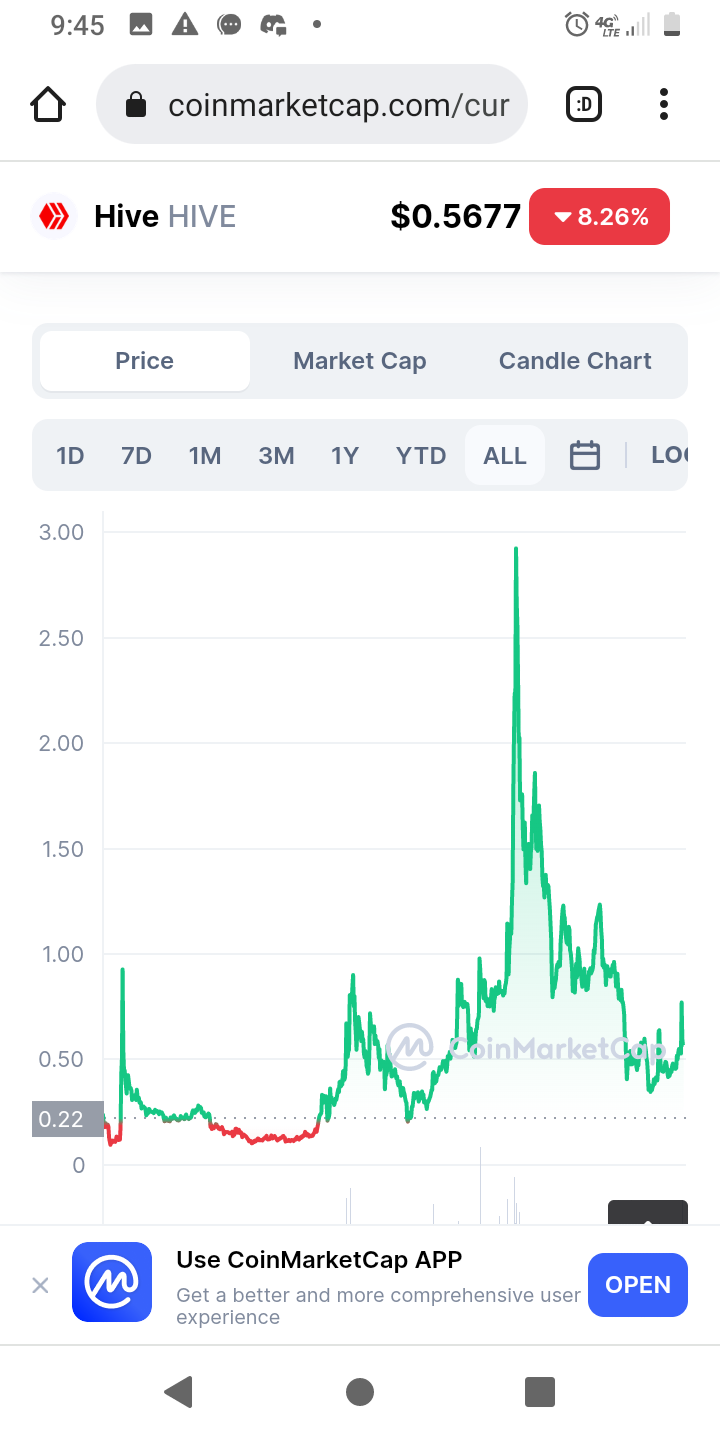 If we look at all the Data on Coinmarket Cap, and then look at Hiveblocks, and the different backends that are like CryptoFresh. The primary driver of Price is the number of users, this is a Consumer Market, HIVE is a Product. HIVE Price is driven by the Buy Walls and Sell Walls on the Market, along with the Daily Block Rate and Block Rewards. The Total Circulating Supply then found on CoinMarketCap which makes the Price, because 100% of the Coins Multiplied by the Market Price of each Coin, is the Market Capitalization. If HIVE is $0.50 each and someone spends $1 Billion, it's very likely that as long as they intend to hold it for at least 5 years and only Sell Curation Rewards, etc, then the Price of HIVE will go up with that purchase and never go back. If say a Nation-State decided to invest in BLURT, HIVE and STEEM, putting a good amount in HIVE, their purchase would drive value, their Citizens joining would drive value, and depending on their Stake, they could probably start giving out Upvotes to their people that were substantial. BLURT doesn't have Downvotes. If this Nation-State did like VKBT and made a Token on Hive-Engine, they could then have their Citizens buy those with their earnings. This could be done by any Business, and Facebook Page, anyone could do this driving up the Price of HIVE. And the earlier someone makes a big purchase like that in the overall timeline, the more of a Bear Market Purchase it is. You could even make a Clone of HIVE or BLURT and use Proceeds from your own Blockchain to finance the Economy, VKBT is the beginning and we will have our own Blockchains and everything soon.
https://coinmarketcap.com/currencies/hive-blockchain/

Staking was Enabled on VKBT only shortly before the ScotBot, these 2 things are important to know for anyone wanting to start a Token on HIVE because on the HIVE-Engine TribalDEX Platform, it costs about 2,100 BEE Tokens to make your own Token. 100 to initially make the Token, 1,000 for Staking, and 1,000 for the ScotBot SMT Mechanisms. If you have skills as a Developer you can create your own for Free, I put all the GitHub repositories in the Bitcointalk Link I shared earlier in this Article.
https://blurt.blog/blurtdallas/@vankushfamily/vkbt-staking-enabled

Now, the BEE Tokens use to make VKBT are gone. They were burned in the Creation of a Smart Contract, meaning they were taken off the Blockchain, reducing the number in Circulation, so those BEE Tokens are gone forever, Theoretically helping raise the Price of BEE. I bought those and never can Sell them, I made a Token instead, which was Automatically listed on TribalDEX. BEE Tokens are generally about 1/2 the Price of HIVE, and this can change, as BEE Coins are on a Smart Contract which produces Proof of Stake Blocks, and the person holding the most finds the most Blocks, but as HIVE goes up in value, 1/2 of 1 HIVE also becomes more USD value. This means that if you want to Create a Token, you either have to be a Developer or pay more and more as the value goes up. VKBT paid maybe $600 to create our Token, and the more we talk about it, the more people join HIVE, the higher that price gets for the next person, so the earlier you get involved the better off you are.

The Token that makes BEE is called WorkerBEE it is Proof of Stake, and allows you to do different things with TribalDEX/HIVE-Engine. Most people will never need to know the Dynamics of WorkerBEE, it is kind of an Investment for those who want to make Tokens, and you should maybe even make a Token before investing if you do invest, it gives you a flow of Tokens that you can sell for about 1/2 of 1 HIVE, and you can use to make different things, or use to give out Grants to others to join your Ecosystem of Rewards by creating their own Token.
https://pacific.dining.gifts/@shubhwaj/making-the-workerbee-work-the-hive-engine-governance-and-mining-token

The best way to Mine these is just like Bitcoin, Litecoin, etc, you Delegate them so it's like a Mining Pool, and the more your Pool gets, the more Blocks they find, the more Rewards everyone gets from the Blocks, and now you're Mining BEE Tokens.
https://tribaldex.blog/@ph1102/staking-and-delegating-workerbee-ph-pool-week-64

If we look at HIVE as an entire Platform, the Metrics are not like the big Social Media Sites, the most Popular posts aren't read 100,000,000 or 1,000,000,000 times, it is still very new, and there are still very few people using these, it's not like nobody knows about STEEM and HIVE, but the numbers are not what they could be and will be in the future. So what we are looking at now with $0.50 HIVE and $0.20 STEEM, and less than 1 Penny BLURT, is like when BTC was $5 and you had to Buy it on MoneyGram. The problem is no one understands any of this yet, no one gets it. And the Blogs are actually a better place to start than it seems most people realize, but VKBT is about to be the start of something that hasn't happened yet.

I'm glad and extremely happy to associate with this great adventure as i can call it. VKBT will be great and I will advise people to state staking.

It is going to be a new Era of Blockchain, like starting over from $0.05 Bitcoin. The years following now will be different.

I'm so anxious to see that happen

It's happening now, a few weeks in almost, but it's kind of in Africa, South America, and the U.S. Hemp and Dance Industries. The Currency people don't see it yet.

I'm in Africa and i will make it go to places. VKBT💪💪

Awesome, next week we should be able to get the Business End of the Van Kush Beauty Economy started up, and start a Revenue. Then we will go from VKBT to Tokens and BLURT, back to VKBT, and then to HIVE, STEEM and all the others and our own Blockchains. We will make Tokens on each outside chain, and make an inside network of a Clone of at least most Algorithms and many Chains.

Alot of people are waiting for the blockchain to get started so they can join. we are taking over Facebook space.

We should be able to get started within about a Month.

This sounds great and awsome too..