My Played Video Games Review: SimCity for the Super Nintendo SimCity is an open-ended city-building simulation video game series originally designed by Will Wright. The first game in the series, SimCity, was published by Maxis in 1989 and was released for the Amiga and Macintosh platforms, followed by the IBM PC and Commodore 64 later in 1989. Then in 1990 on the ZX Spectrum 48K and 128K by Infogrames. The Super Nintendo (SNES) port was very similar to the original edition but had some unique features, including Reward buildings, a Mario statue, and possible attacks by a giant monster.

This was the first city-building game I really enjoyed. Back then, I never thought that video games could be fun without destroying/killing enemies or finishing a quest. 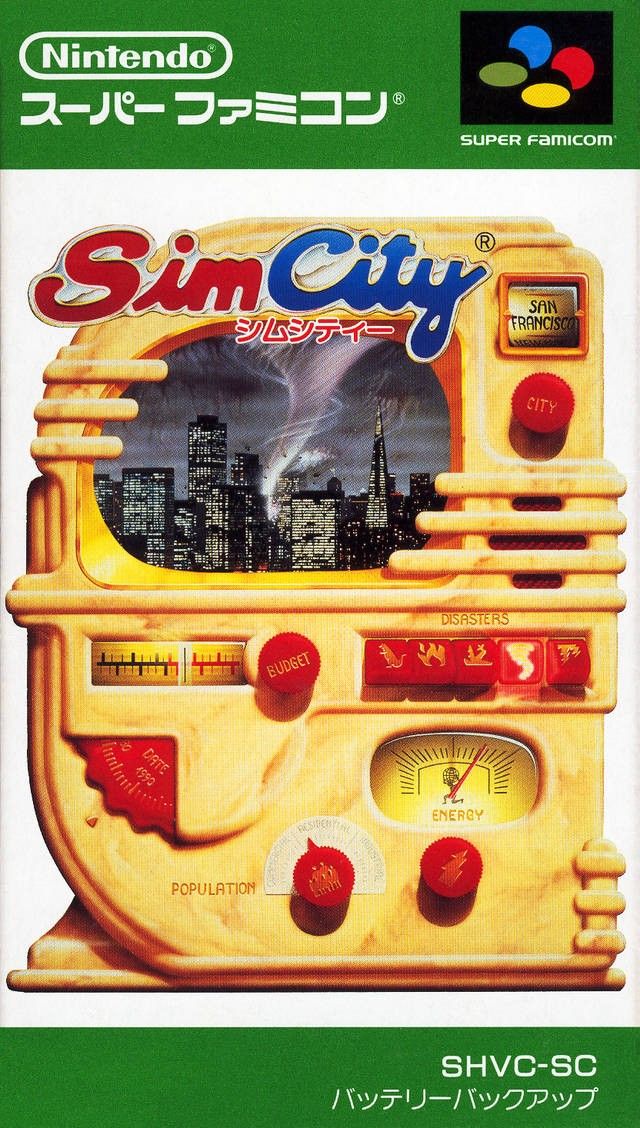 With SIMCITY, take the destiny of a rising city in your hand. Build homes, streets, workplaces, airports, and a stadium. You will have to fight crime and pollution, collect taxes and balance the city budget. Everything is managed and animated in real-time. Every decision influences instantly the life of your city. You will face crises, and natural disasters but - who knows - maybe one day you will finally get the city of your dreams. Box, cartridge and manual of the game. (Image source)

The Graphics and Sound

This game's graphics are not really its strong point. Although they are not bad, the console could have done a lot better. The worst thing about the graphics is the lack of animation. There are some, but not that many. The only animation is stuff like little dots moving around which are supposed to be vehicles, or smoke coming out of a factory. All of the pictures in the game are quite sharp. The landscapes look nice, and the scenes where the presenter gives you advice are pretty good. Overall, the graphics are just okay.

The sound here is awesome! There are several music tracks and sound effects. There is a different type of music for your city each time it goes up a level, and cool sound effects when a plane crashes or when the big monster attacks your city! SimCity's sound definitely makes up for its graphics.

Gameplay video sample of Sim City on the Super Nintendo.

You are the mayor building a simulated city. As that mayor, you are gonna be in complete control of what goes where and who does what. You will build houses for the population to live in, businesses, for them to work in, and industries. You will have to manage all the city's problems. Like traffic, pollution, or rising crime.

The controls are very simple. You basically move around a cursor with the controller/gamepad and select options with the "A" button. It is easy to get used to. It will be second nature to you throughout the game.

The game is tough. You will often be finding yourself running out of money, raising taxes, angering the population, or having a disaster. But this challenge really contributes to the game.

The replay value is very good. There are plenty of maps to play on. A practice mode, several scenarios, and it is a whole lot of fun! The game will keep you invested in it for a while.

SimCity is truly one of the better games for the Super Nintendo. It makes you think but also have some fun while doing it. Though the graphics and sound are not that great, it is still a good game with lots of replayability. This is a must-play for the Sim series fan or someone who just wants a good game to play.

Play it on the Super Nintendo/Super Famicom or play it on a trusty emulator.

Let's keep on gaming in the free world!

blurtgaming blurtech blurtreviews gaming retrogaming
14 days ago by darthnava
38.38 BLURT
9 votes
$0.10
0
Authors get paid when people like you upvote their post.
If you enjoyed what you read here, create your account today and start earning FREE BLURT!