ajerkoff in contest •  2 months ago  (edited) 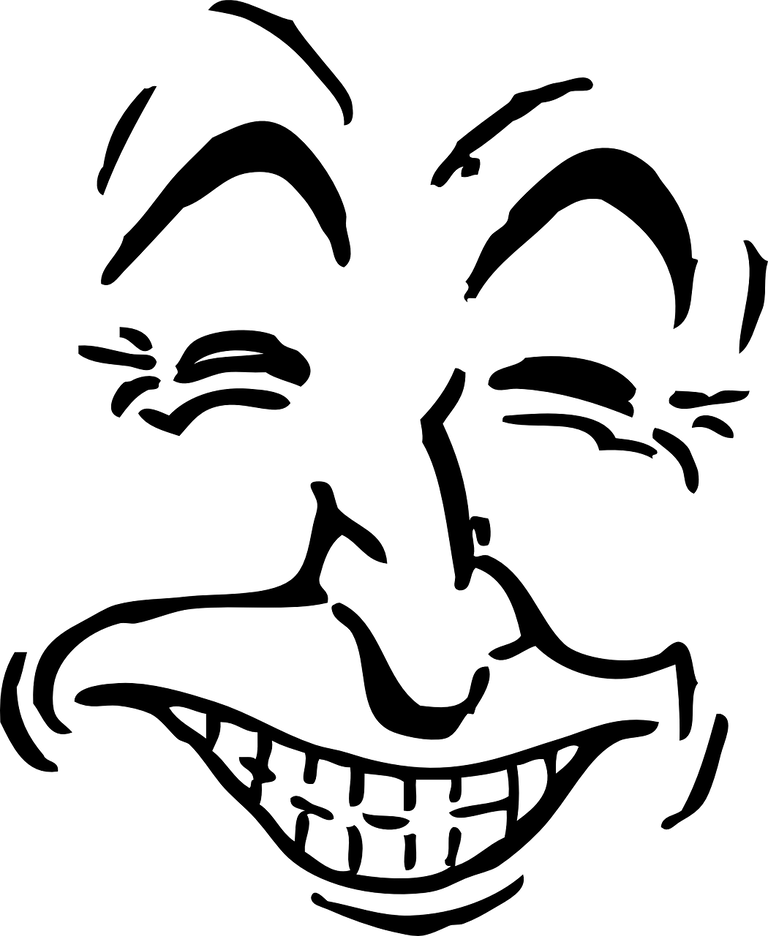 Sunday for me and mine is a pure fun-day so let us extend that to blurt.
To enter there is only 1 rule, re-blurt, that is it, the more that see this, the more that can enter.

On this trip to Thailand I had stupidly decided to buy a bar, don't ask, hindsight is a wonderful thing. I had taken £2,000 from my bank over 4 days and had nowhere to keep it so I put it in a plastic bag and a bumbag around my waist. Then my friend who had come along from the UK a young guy called Nick asked what it was like on a jetski, so I said try it.
I could see he was full of self doubt so I took the lead and hired the largest Yamaha engine jetski they had and put my bumbag in the front of it, a small bonnet.

We set off in the ocean at full speed, calm waters to start off with, we headed towards a small island known as Koh Chang or elephant island to see if we could get there and back in 30 minutes.
I stopped around a 1/4 of a mile at sea and offered Nick a chance to pilot which he gladly took. 1 minute later he had hit a wave and we were both now in the ocean.
I got back on after a few minutes and pulled him aboard then set off asking him how he managed that. I found out a couple of minutes later as a large wave sent us 10 to 15 feet in the air.
I hit it face on and it just threw us in the air with the ease of tossing a pancake.

When we both looked around the jetski was sinking engine/back first.
Now there are 2 ways you can react to this situation, panic/fright or laughter, I chose the latter, and so it was the two of us stranded almost a mile from dry land were hysterically laughing.

I would guess it was 4 or 5 minutes before the Thai man who rented us the jetski turned up and took me to shore, he then set off to get Nick and last but not least his sunk jetski. Only the very tip of it was above water the last I had seen of it.
The front had a small rope in a loop attached which he used to tow it ashore.

On the beach a furious argument started between him and me, he said I had to pay for "new engine", I refused, but I needed my money and bumbag from the front without him seeing, so I got Nick to distract him with arguing.

I retrieved the stash of cash and headed to the beach road to my Honda cbr 400 fireblade, my bike of choice for Pattaya.
I started the bike up and Nick ran to me as he was surrounded by 5 or 6 angry Thai men, he jumped on the back and we left as fast as was safe on beach road with 6 furious Thai men still shouting at us.
We arrived at my favorite bar back down in Pattaya, the blue room and sat and laughed for an hour.

You can enjoy the moment or fear it, the choice is yours.

Have a superb Sunday and fill it with fun and take some risks, you only live once!

Come on @lucylin & #rycharde living there you must have a few.

contest competition fun laughter rycharde
2 months ago by ajerkoff
636.13 BLURT
35 votes
$2.15
23
Authors get paid when people like you upvote their post.
If you enjoyed what you read here, create your account today and start earning FREE BLURT!
Sort Order:
[-]
blurtlatam  ·  2 months ago
Manually curated by @vickyguevara

Follow @techclub for more updates and use tag #techclub for tagging content
you can also delegate to @techclub to support curation
0.00 BLURT
$0.00
[-]
ajerkoff  ·  2 months ago

Did many things the last week that where stupid funny .
It started when a friend here said ,.. see that beat up china 4stroke quad , if you get it to work you can use it for transport and fun . Generator coil was not good , no spark , missing parts all over like lights cap's and not to forget , no brakes either .
Yeah fun let's get it to run , changed the coil's for a other set , got the cdi connected properly ( left the kill-switch wire out ) and started the bugger up with a battery loader , for it had no battery in it .
The bugger took of for the idle throttle was set way to high , and as i later found out , the clutch was burned stuck together . So after some uncomfortable attempt's to adjust it , holding the quad from wheeling of whit your foot does not help when trying to adjust a carburetor idle screw and stuff , i decided that taking a ride would be way more comfortable , how fast could a 150cc go on this high idle setting , and i did half kind of fixed some braking in the front , i thought what can go wrong ? . Screwdriver in hand i started it up and hopped on .

On idle doing about 15km/h , way to fast to stick your head in the engine to adjust some tiny screw , especially when all roads are bend in corners everywhere and have all different elevation to . So i just enjoyed the ride while exploring the higher throttle regions . It was only when i wanted to end the ride that i started to worry a bit , how do i stop this beast ?
I managed by slaloming wildly to bring the speed down to 10 km/h , and the front brakes that i looked at before helped with an other 2km/h speed reduction . Wildly steering left and right i did my best to find the kill-switch wire , to connect it to the cdi box . Could have just waited a bit for the fuel to run out after closing the fuel valve on the fuel tank , but no , i made other decisions .
I pulled the red-black AC power wire from the cdi box , coming directly from the generator coil . 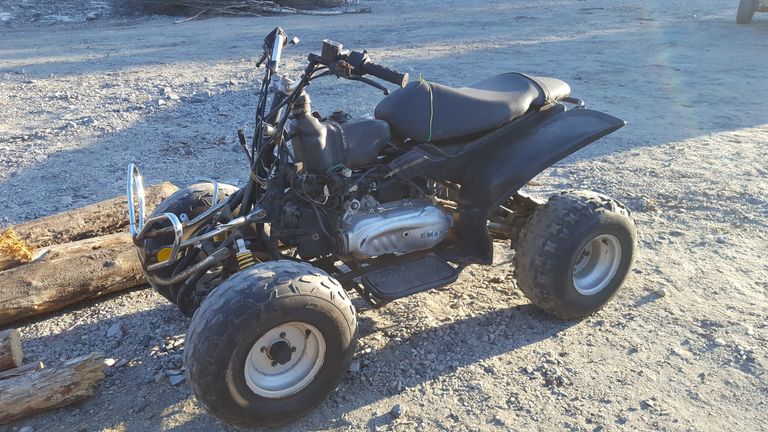 I leave the visual picture up on to your all imagination , the experience was electrifying and some what chocking i can tell , and if i didn't laugh it off , i would have never toughed that chinese crap again .

It might have not bin in Thailand this story ,.. but some Asian "connections" where involved . ;-)

A few years ago when I was living in Tasmania Australia I was out with a few friends on the west coast area. We all had our own quad bikes and near were we unloaded the bikes I notice a hint of an old track going into the dense bush. So myself and a mate decided to go have a ride up the track and it just ended a few hundred metres along in really thick bush and couldn't see more then a foot. With almost no room to turn the quad bikes around I decided to back into some shrubs to make enough room. Next thing the bike dropped out from under me and I'm left holding onto some plants luckily the bike didn't go very far down as it was tangled up. My mate was cracking up with laughter and the I could hardly hold on as I started laughing. Eventually I crawled up and assessed the situation. We managed to get my mates bike turned around then hooked up the winch and pulled my bike back up and away we went to regroup with the others. They heard the laughter and asked what was so funny. 🤣

Nothing funnier than being close to danger unexpectedly :-)

The funny story I'm already living nowadays. We always make fun of sanctions. So, yesterday I was talking to someone who told me that vodka is not allowed to sell in some countries. Some are also having special restaurants for Russians who live there and other special ones for Ukrainians. My wife also watched a video recently where an Ukrainian old woman attacked another Russian woman with a stick telling her so many bad words. I like also recently what a guy said to laugh, he said that he will not have sex anymore with Russian girls. lol

Yesterday we were talking with my wife how they can make a blood test for those who still drink cocacola and they will not provide them services because cocacola still here. Or nestley or what ever. I also told here what if they will not allow people to enter MacDonald if they will not prove that they hate Russians. lol Anyway, the life is fun, sanctions are stupid, and the world is going crazy.

I hope you watched the video where I show how many products we have here and the prices that didn't change that much. ☺

Superb thanks for your input.

Laugh, It Removes Fatigue : A comedy !

Once, there was an elephant 🐘 walking near a swimming pool 🏊. It slipped and fell into the pool.
Now tell me how will the elephant come out the swimming pool?

It's not completed. It will be completed by your answer. So, answer please!

I can find no info about the swimming pool being filled with water .
So how can you state the fact that the elephant must be wet when coming out of he pool ? Was it raining ? or did the river flood ?

No , we all know , the elephant comes from the pool using that little stainless steel ladder in the corner . ,.. just logic . ;-)

It's an imagination and not fact.

No elephant ? ... so the pool did not flood ,..there was no river and it probably did not rain .
Well then i start to wonder if the banana was the object that could have made the imaginary elephant slip in to the swimming pool . 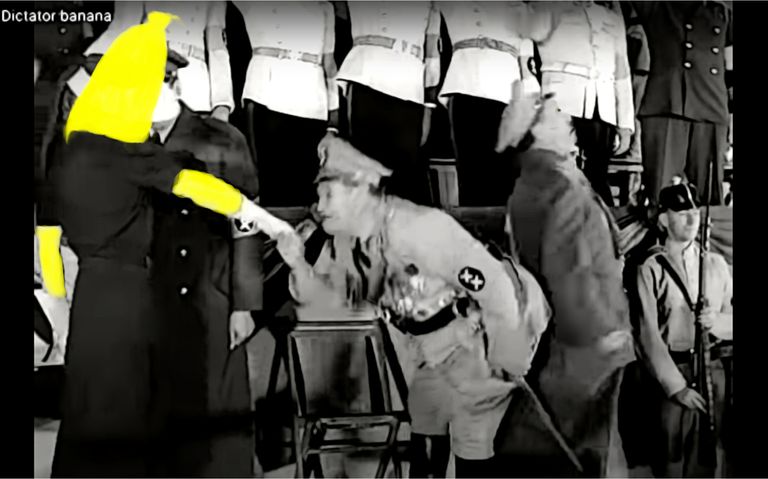 Yeah! It's for fun only.

lol 😂 but the contest is real life stories/experiences. Thanks for the laugh though.