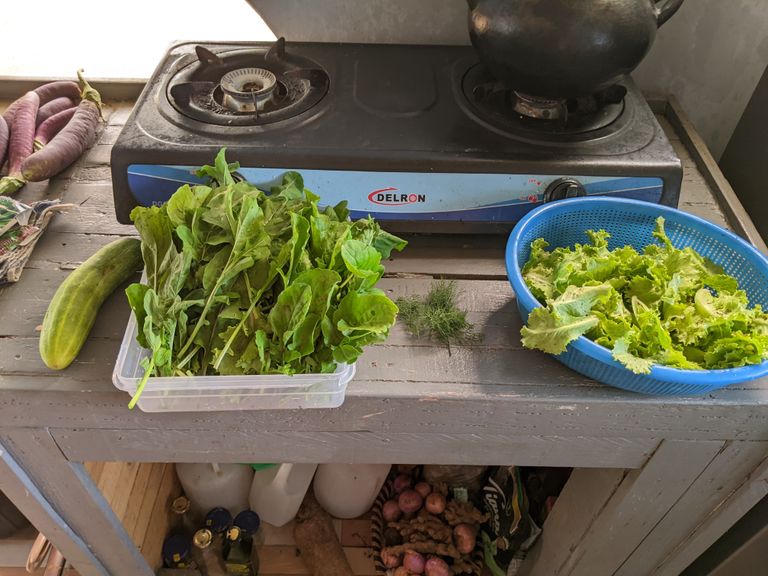 Wow it has been a month already since my late may update. June has been going well. There has been less pressure from pests and a lot more growth with weekly rain storms. I have been spraying with a hot pepper spray and it also seems to help with the pests. We have also been doing some small time harvesting and eating out of our garden. With the rains have come a lot of wild grasses which are a step up from the weeds last year after being freshly plowed. I only get to work on the farm in the evening from about 4.30 or 5 to 6.30 when it gets dark. At the end of this I often just sit by the water tank enjoy the sounds and the view. 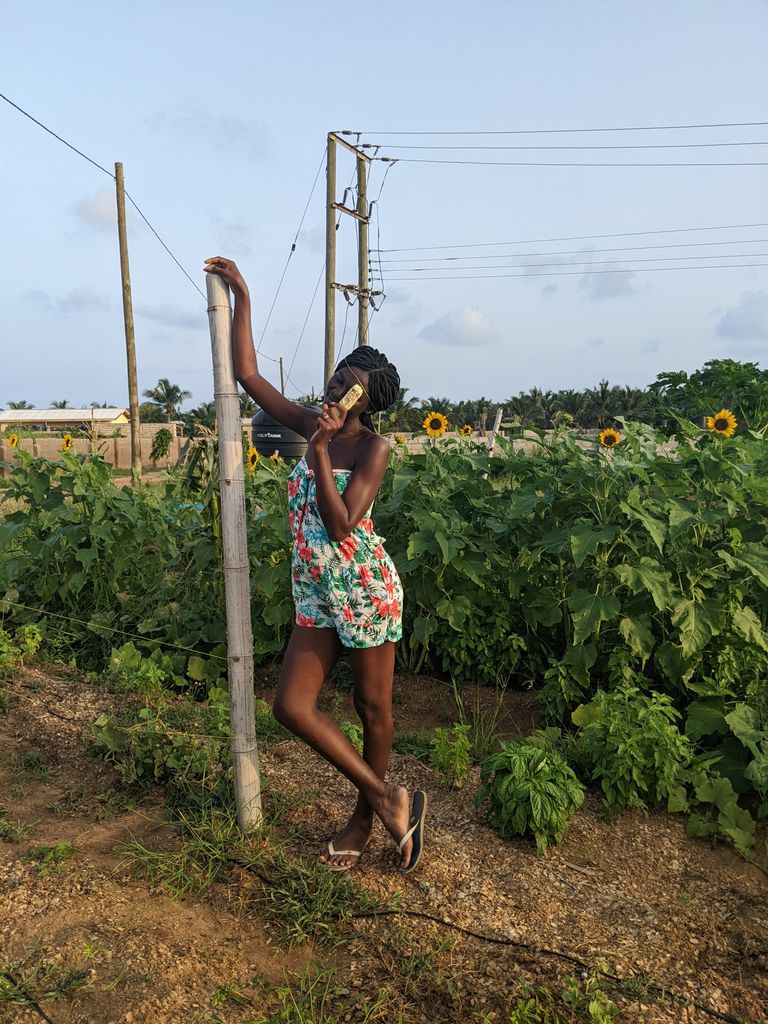 @dzigbordi my wife is always a big help in the garden and I am so happy to have her back and helping me. During her first 3 months of pregnancy the morning sickness was too much for her to do much of anything. Here is she is messing with some corn in front of the 3 sisters (corn, beans, squash) with the addition of local sunflowers. She is leaning on a trellis for cantaloupe which we are hoping will recover from multiple leaf miner attacks and vine borers. 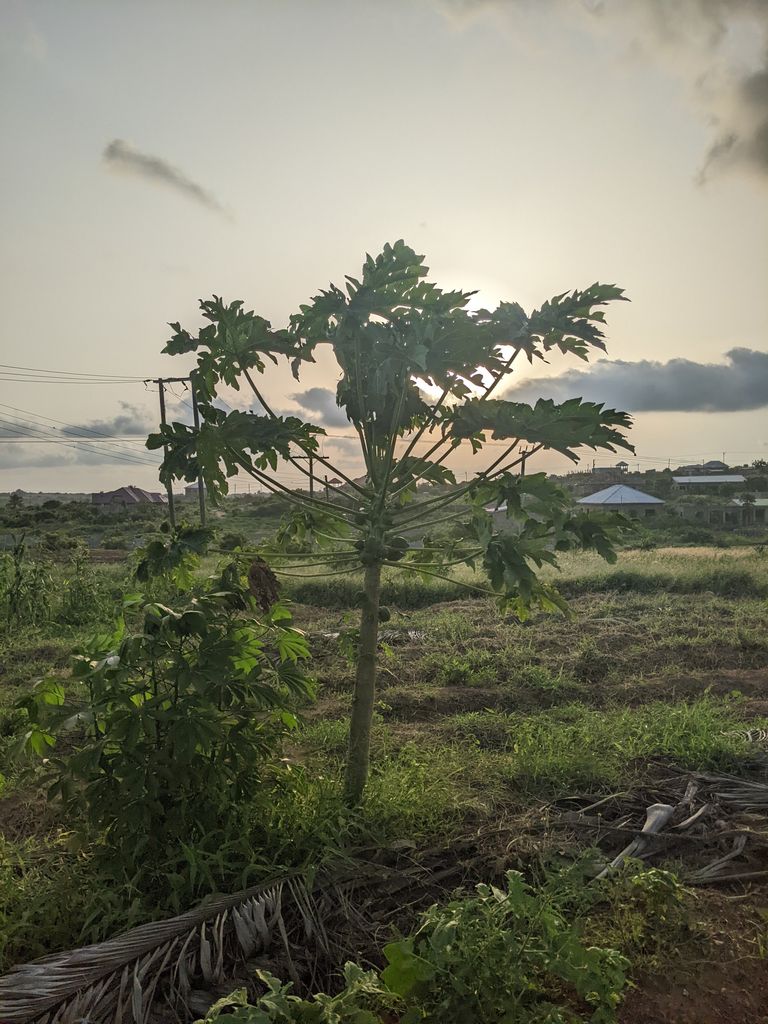 One of our Pawpaws on the swale showing her babies off. She gave us our first one the lowest one there recently. It was small as it was the first production from last season and it hung on for a while until it was just right and Dzi really enjoyed it. 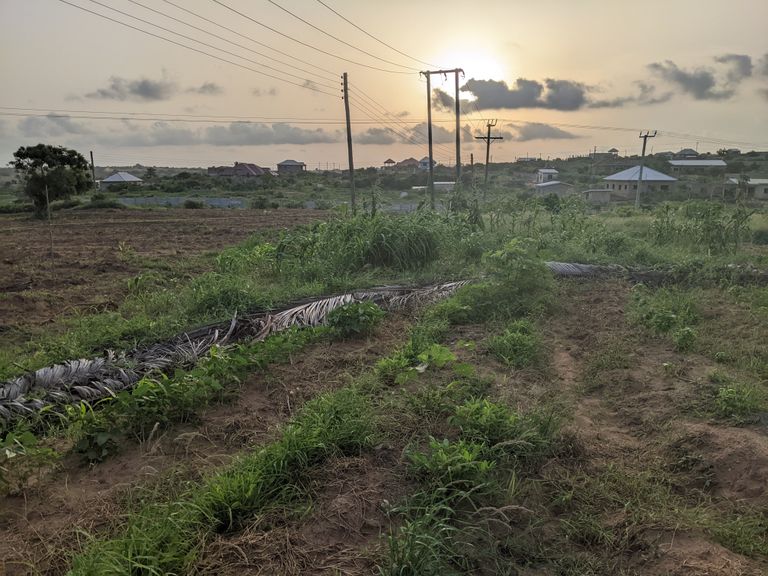 Some more sunset photos. Looking down a row of bambara beans and Okro straight in front. The row to the left along the second swale down is corn and beans. The row to the right is the picture below. This continuation from the picture above I have a row of peppers, basil (curly leaf and classic italian), and a couple of tomatoes. The next row is tomatoes and basil. The bed behind is another 3 sisters but none of the water melon survived here so it is is only beans and corn. 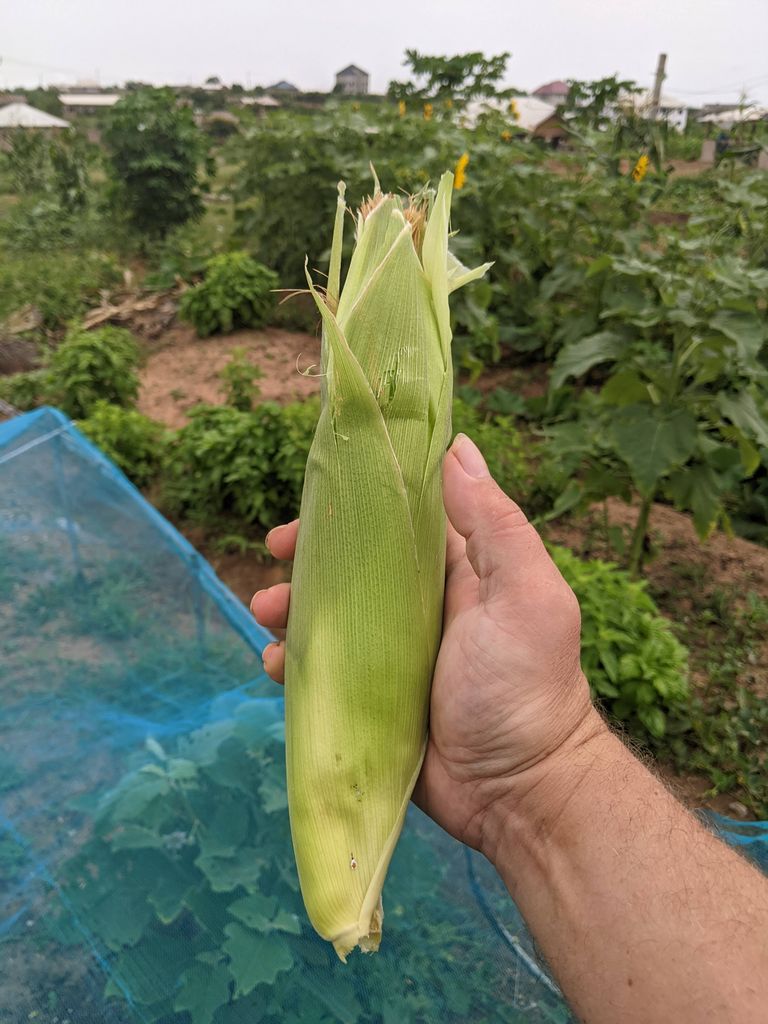 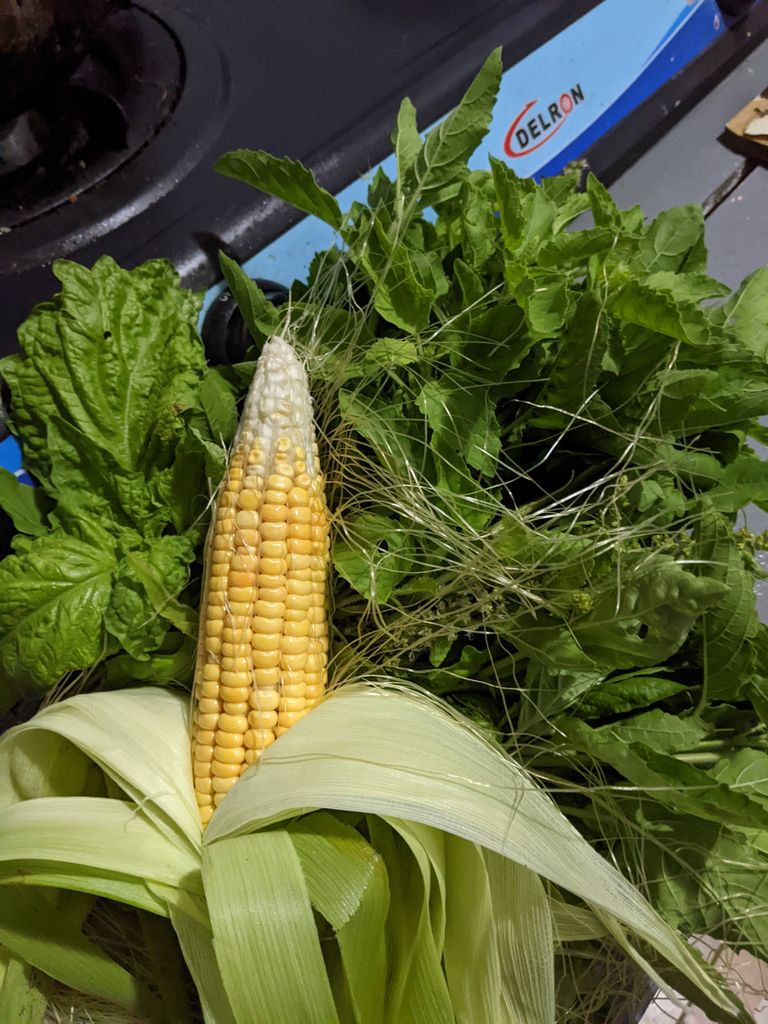 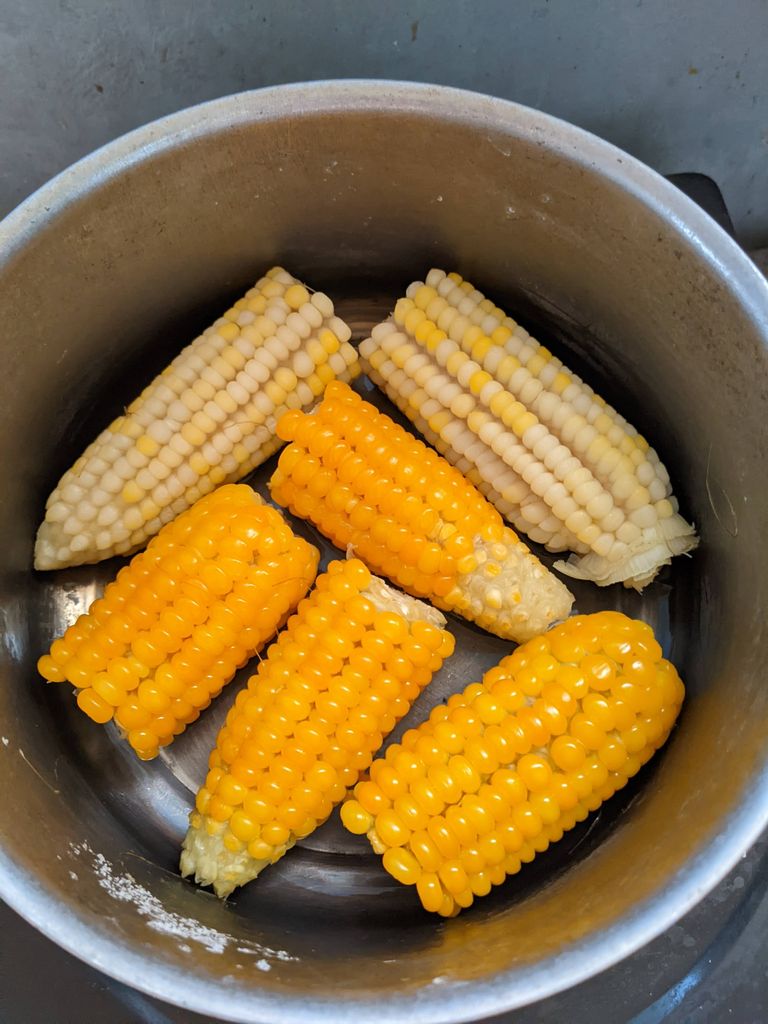 Our first corn mini harvest went straight to the pot. This is heirloom seed grown organic. We had yellow, red and white in the field. It looks like some of the white and yellow have cross pollinated. They were so damn sweet we don't care though. 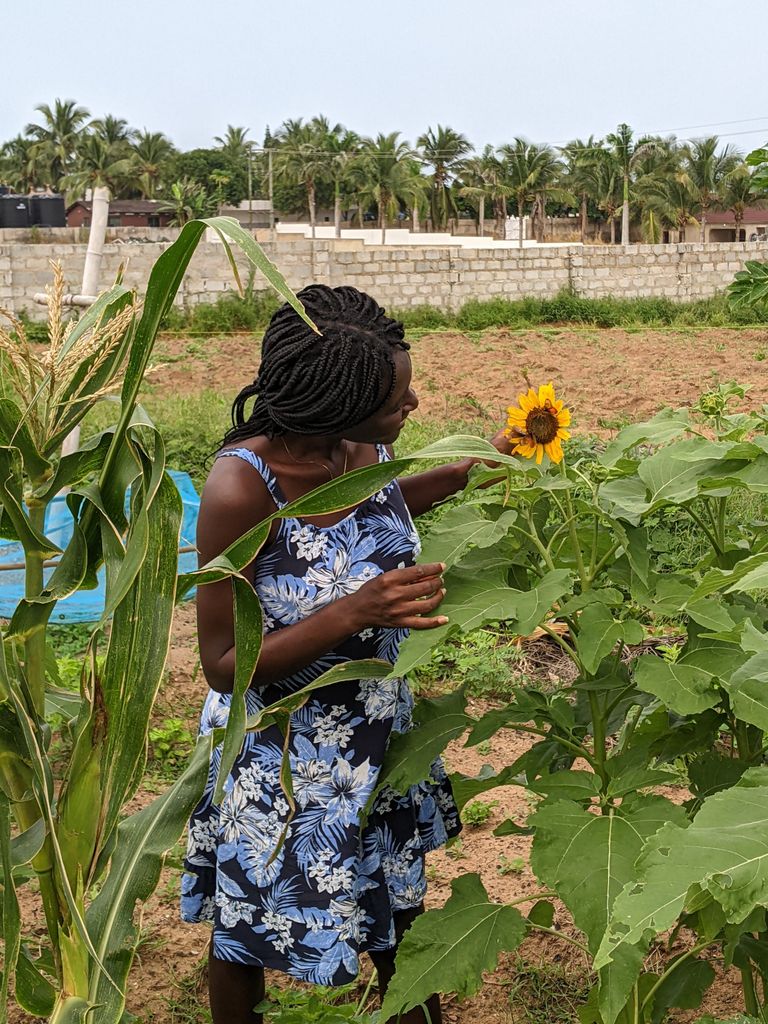 We are now starting to see a lot more of the pollinators. Bees and butterflies particularly. Dzi enjoys playing with the butterflies. Another shot of the butterflies, why not? 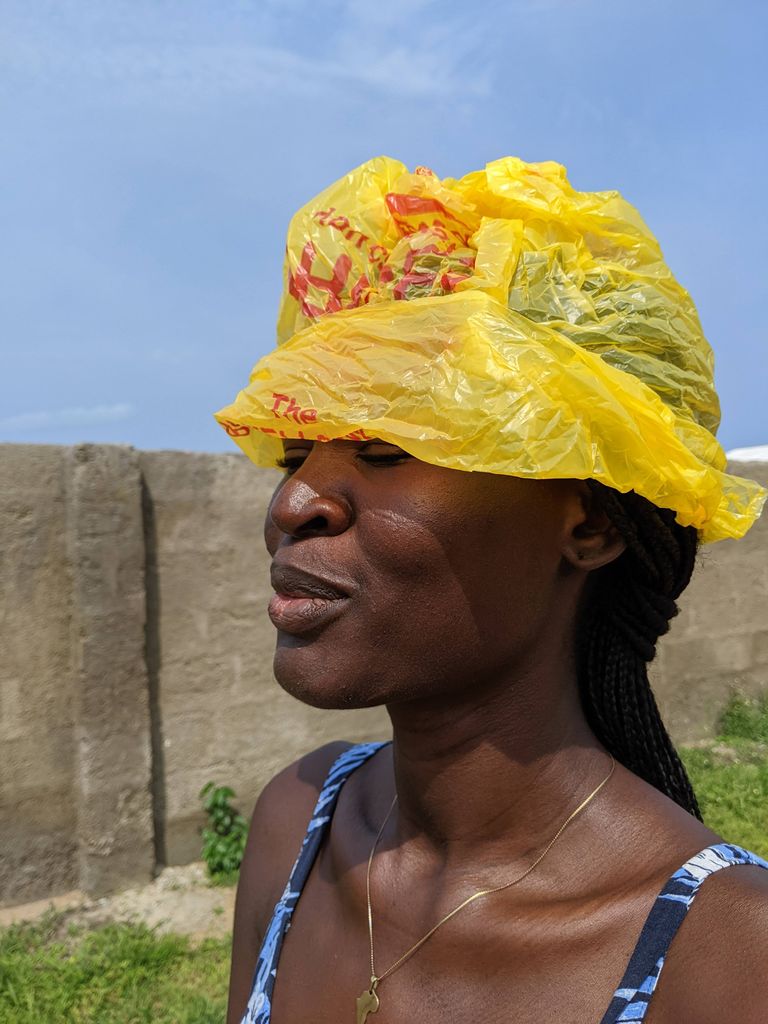 On the short walk to the garden one day Dzi was messing with one of our harvest bags. Turned out to be a great shot though. I don't know what it is about this lady and yellow, even if it is a bag on her head. Keeping up with the weeds is a task, but it is now giving me a lot of mulch as a just chop and drop it. I will finish the whole farm and the next day I have to start over where I started before. 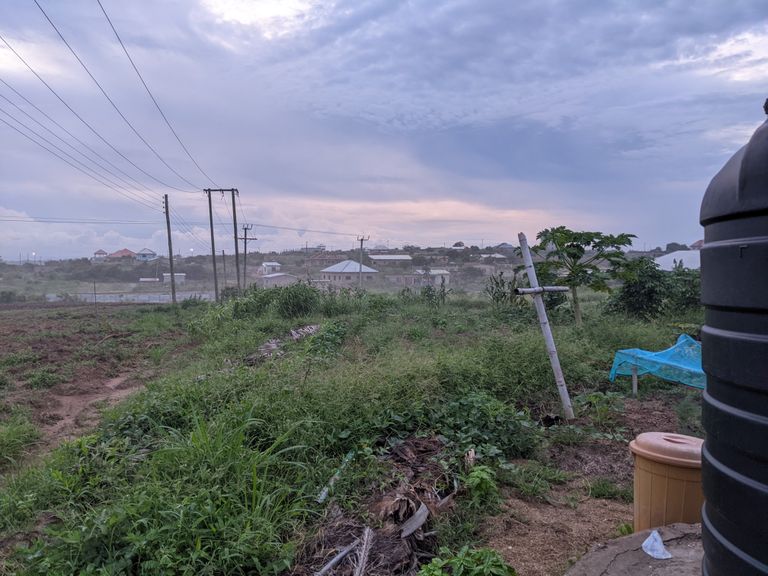 One evening was very misting and made for a cool effect around the farm. It seems my google pixel phone edited out a lot of the mist though. Down the line of view you can see my rows of corn, millet and sorghum. Some of my tomatoes are starting to plump up. Lettuce coming up again after my last harvest where I cut it off at the ground. This is a bed at the top between the road and the first swale. It has basil, spinach, onions, cabbage, a volunteer cucumber, and 3 volunteer tomatoes. I have some more tomato seedlings I think That I will probably fill in the spaces with them. 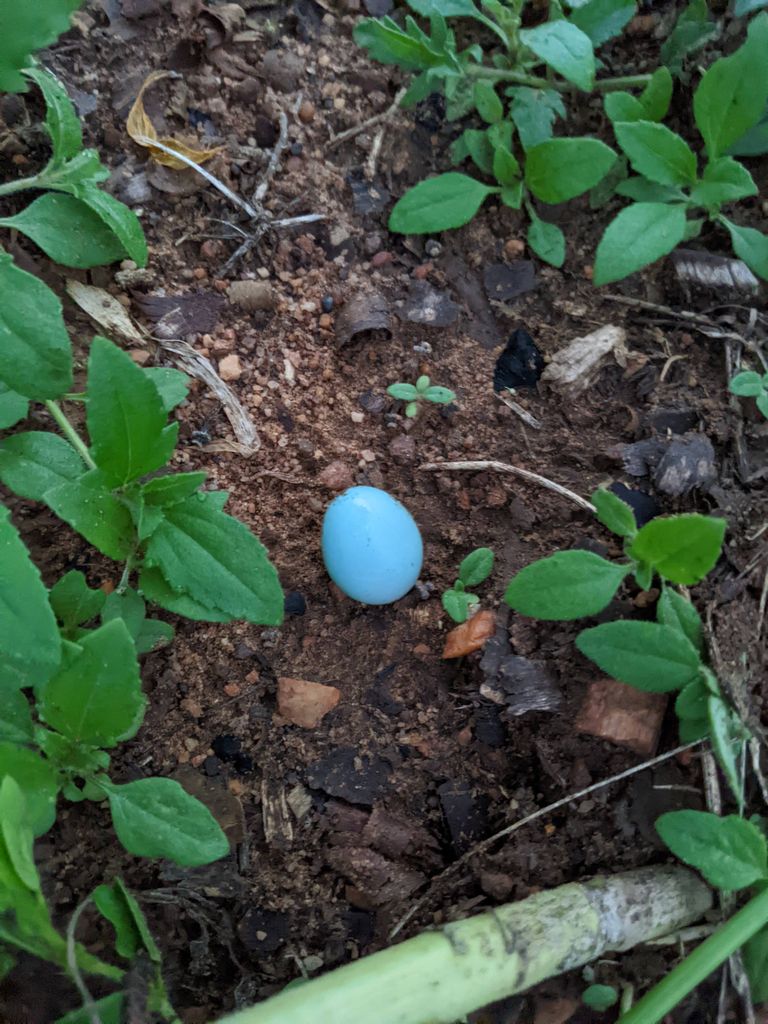 This was a strange find a little blue egg in the garden at the base of one of my sunflowers. I left it be and I think it is still there. I am really surprised a lizard, or a rat or something hasn't eaten it. Never ever mess with a pregnant woman with a machete, this woman can do some work with it. Be warned. But with ever hard side there is a soft side too, and she takes good care of little green babies too. Here is the latest picture of the rows of tomatoes and peppers after some weeding and staking last week last week. The peppers are very slow to get a start but they will eventually out live everything into the dry season and keep producing. I would have probably left last seasons peppers in the ground to see about a second season but that is where I put the water tank.

See the beautiful millet and sorghum in the background. A 3 sisters on the right side, okro and bambara beans on the left side, swale at the back. 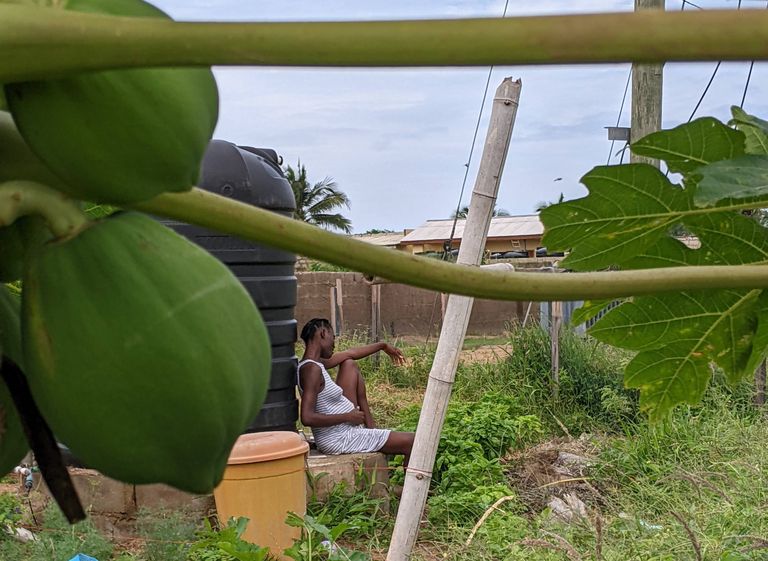 This tree, pregnant with fruit juxtaposed with Dzigbordi. I saw beauty in nature and an art piece lol. This is our favorite place to sit in the morning after breakfast or at sunset after some evening work. The bed of basil right next to us over powers the smell of any escaping JADAM liquid fertilizer from the barrel. That is a story for another day. But if you open that it smells like you have released a giant cow fart. I have planted a lot of seeds this season and I have had very little luck. I know that it would probably be better to start in the house or a well controlled area in seed trays but that is just not a luxury I have at the moment. I think part of it is pest pressure also. Maybe off timed cycles of dry and wet between rains and my hand watering. But the last few years in general I have not had a lot of viability in seeds, and I have got them from so many sources. It could be storage factors but even newer seeds still are not producing. The best ones are ones that we usually get from friends, collect ourselves and trade for. I have not gone down the road of buying cans of seeds like I see in the local shops. Oh a lot of volunteers from compost have been very helpful in building the garden this season. I think there is something to say for a seed growing just where it can or wants to you just have to change your plans sometimes based on what you get. What I have gardened so far between the 3 swales I have dug is about 1/3 of an overall acre that I have to work with. When I got the land it was completely plowed and and dead in a lot of ways. When I say get, it was loaned to me from the owners of the hotel that I manage. Long story short someone who thinks they are close to the owners has tried to make some moves for the other 2/3 acre that I have not planted yet. I know it is a little too much for me to manage on my own but I would prefer to see the land managed well and in my care as I was kind of left the care taker of it. So my plan was to put some pigs on it with the help of an electric fence that my dad brought some of the things for me on my last visit. I have started one part of the fence that will be a bit stronger between this land and the a joining land.

So this guy tried to have a tractor plow the land some weeks ago and he wanted to farm it. I said no and my assistant manager who knows him also told him no I didn't want it plowed. There was a nice assortment of local grasses, a few weeds, and a few Neem clusters. It was ripe to get pigs on it even if it was later in the season it looked like good pig food for me. I also know that the land was coming alive again after being plowed last year.

We came to find two days ago that the land had been plowed. The guy used the guise that the owner of the resort asked him to do it to keep snakes out. So we took the chance anyway to put our will onto it and we have not planted half of it and put out word that I should see no one on this land again or another tractor. So far we have planted a lot of okra, corn, sunflowers, and casava. I will plant the rest with sorghum and millet. When I get the fences done I can release the pigs into sections and let the till the ground for the next season and plant behind them.

I find it very difficult to farm in a permaculture way in Ghana sometimes because people can be very jealous or critical. They have adopted industrial farming without the industrial, simple tractors sometimes but rows, monoculture, plowing, and chemicals is all they know. Anything bushy looking is a haven for snakes and criticism and destined to be cut down or burned down. I would love for this section of land to be a food forest with little pathways through a labyrinth of producing trees and bushes. But sadly I am on someone else land at the moment and the politics have stared. I will leave you with a picture of the farm from this morning. Here I have 3 half rows of watermelons and 3 half rows of sweet potato, with another 3 sisters to the far right. Above the next swale are 3 rows on stand by for seedlings with the 4th row having zucchini. Once again it is time to weed before people start complaining lol.

gardendairy garden blurtfarm permaculture food blurtafrica farm homestead nature
3 months ago by leifasaur
660.51 BLURT
44 votes
$1.90
11
Authors get paid when people like you upvote their post.
If you enjoyed what you read here, create your account today and start earning FREE BLURT!
Sort Order:
[-]
blurttribe  ·  3 months ago
Thank you, your post has been upvoted by @blurttribe.
Curated manually by @obikay

Follow techclub DISCORD for more updates and use tag #techclub for tagging content
you can also delegate to @techclub to support curation
0.00 BLURT
$0.00
[-]
blurtconnect-ng  ·  3 months ago
Hello @leifasaur

Waooooo, @leifasaur, few months ago you planted and now you are also harvesting, isn't life wonderful?

What a bountiful harvest. Am delighted that your wife is very interested in what you do, it's a big relief.....

Do enjoy the rest of the season.

Yes nature is beautiful. My wife has always had a passion for farming so it is just something we share.

Wonderful garden, I used to have something like this but it got too hard to maintain since I move around a lot. By the time I return weeds has cover my plant or they have been eaten by pest. I love your post it's well detailed and the images are perfect.

Yes I had a smaller place somewhere I did not live and it because too much to manage as I was across town and then when I moved farther away.

Wow some great crops I wonder what the blue egg was from! ?

Yeah I would think that a reptile would have more than one egg and not out i the open. We get a lot of colorful little birds around. This one did not win parent of the year.