rajmahamud in news •  2 months ago SOURCE/www.bbc.com
Nepal has shown remarkable success in bringing the endangered Royal Bengal Tiger back from the brink of extinction. In this small and impoverished country in the foothills of the Himalayas, tiger numbers have doubled in the last 10 years.

But local people have to pay a lot for it. Because tiger attacks and deaths have increased.

"When you come face-to-face with a tiger, you have two emotions working simultaneously," said Captain Ayush Jung Bahadur Rana, who is a member
of a unit dedicated to tiger conservation.

"First you will gasp at the majestic form of the tiger, and at the same time you will think, Oh God, is death on my forehead today!"
Five ways Bangladesh can increase the number of tigers

How important are the eight tigers growing in the Sundarbans?

Tigers are dying around the world due to hydropower projects

While patrolling inside the Bardiya National Park in Nepal's Terai region, now Captain Ayush often comes across tigers. Covered by fields and dense forests, the park is still sparsely inhabited.

"I feel honored to be given the responsibility of tiger conservation. It's a privilege to be associated with such a great cause," said Captain Ayush, keeping an eye on the dense forest ahead.
Nepal's zero-poaching policy has worked well in tiger conservation. Nepalese army is now helping in the security of the national park. Community units have been created in townships adjacent to the park to prevent illegal tiger poaching and to ensure that tigers can move safely into the surrounding forest through the various trails connected to the park.

But because the number of tigers has increased so much, the risk to the lives of people has increased in the settlements on the edge of this park.

"People in the area now live in fear," said Manoj Gutam, who runs an eco-tourism business and is also a wildlife conservation campaigner.

"The area where tigers and their prey and humans co-exist is small in size. The rest of the world is excited about the doubling of tiger numbers in Nepal, but local people are paying a heavy price."

16 people have died in tiger attacks in Nepal in the last one year. But the total number of deaths in the previous five years was only 10. SOURCE/www.bbc.com
Most of the tiger attacks happen when people go to graze cattle and goats or collect fruits and wood in parks or buffer zones.

Sometimes ferocious wild animals enter the neighboring villages on their way to the park or nearby forest. Wire fences are built between human settlements and parks, but tigers often climb over them.

Vadai Tharu lost one of his eyes at the hands of the tiger he was working to conserve. In 2004, he was attacked by a tiger while cutting grass for cows in a forest near the village.

"The tiger jumped on my face with a huge roar," recounted Tharu. "I fell first. The tiger also retreated a little. Then I hit him with all my strength and started screaming for help."

After opening the black sunglasses, a large wound was found in the corner of the eye, and one eye was missing.

"I was very angry. I felt like I had committed a crime by working for tiger conservation? But I understand that tigers are endangered and it is our responsibility to protect them."

SOURCE/www.bbc.com
The latest statistics on tigers around the world are very disappointing.

A hundred years ago, there were about 100,000 tigers in Asia. By the turn of the century, that number had dropped by 95 percent. Main reasons – legal and illegal hunting as well as loss of habitat. According to the calculations of the International Union for Conservation of Nature, the number of tigers in Asia will be between 3726 and 5578.

The Bardia area of ​​968 square kilometers was declared as a National Park in 1988 for the conservation of endangered wildlife. Once this area was the hunting ground of kings. But now hunting is prohibited.

To save the tiger from extinction, 13 countries together in 2010 set a target of doubling the number of tigers by 2022.

But only Nepal has managed to meet that target.

In Nepal, where the number of tigers was 121 in 2009, this year it has increased to 355. These tigers mainly live in the five national parks of the country.

Not only tigers, but rhinos, elephants and leopards have also increased in Nepal. SOURCE/www.bbc.com
In forests where tigers were once hunted, management and monitoring has been strengthened. In order to increase the number of tigers, the grass area has been increased, many wetlands have been created to increase the deer population as well as to create food resources for the tigers.

Bishnu Shrestha, chief security guard of Bardia National Park, rejected the criticism that the level of artificial measures to increase the tiger population is excessive.

"There is enough space inside the park for the tiger and the animals it needs to hunt. There is a balance between the numbers. We are making arrangements so that the tiger population is at a sustainable level," he said.

Fear is increasing in the public mind
Even so, the people of the area around Bardia National Park were in favor of tiger conservation. They also cooperated in conservation. But the increasing number of tigers has created uneasiness and apprehension among them.

"Tourists come to see tigers, but we have to live with them," said Samjhana, whose mother-in-law died in a tiger attack last year. He was attacked by a tiger while cutting grass inside the garden area for the cows.

"I loved her more than my own mother," - says Samjhana with tears in her eyes.

"Many families like mine will have to suffer in the coming years. More people will die." 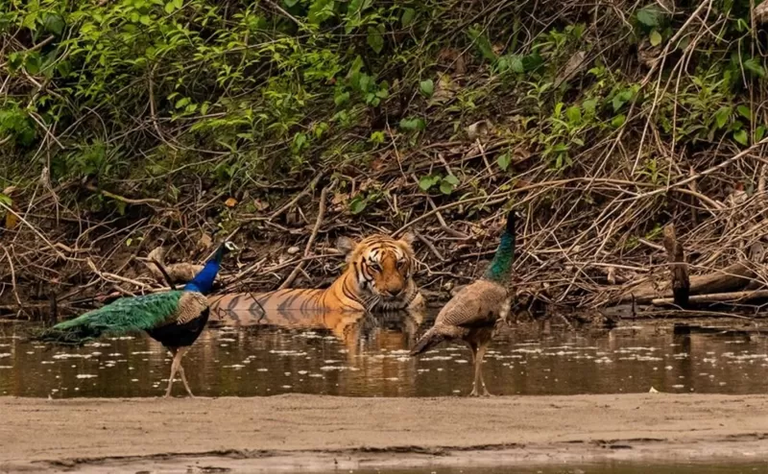 In March this year, Lily Choudhury, a resident of Sainabagar village near Udyan, was attacked by a tiger while giving food to her pet pigs behind her house. Later, the villagers rescued him in a battered state, but he could not be saved. "From now on, we are afraid to even go into the yard to feed the cows or pigs," said Asmita Tharu, sister of the deceased Miss Chowdhury.

On June 6, Asmita Tharu and her husband were attacked by a leopard and the villagers were outraged. People were already outraged after a tiger attack in a nearby garden killed a man a week earlier.

About 300 villagers started protesting in the streets demanding security. They set fire to the local office of the forest department. The police actually started throwing stones at them. A young woman named Nabeena Chowdhury died when the police opened fire. The young woman who was killed by the leopard attack was their niece.

The victim's brother Nabin Tharu was nearby when the body was shot. "After being shot, I tried to take him off the road but the police started beating him," Nabeen said.

Nabin's family has been promised $16,000 in compensation by the government of Nepal. Also the government has said that a statue of his sister will be erected in the village with the status of a martyr. 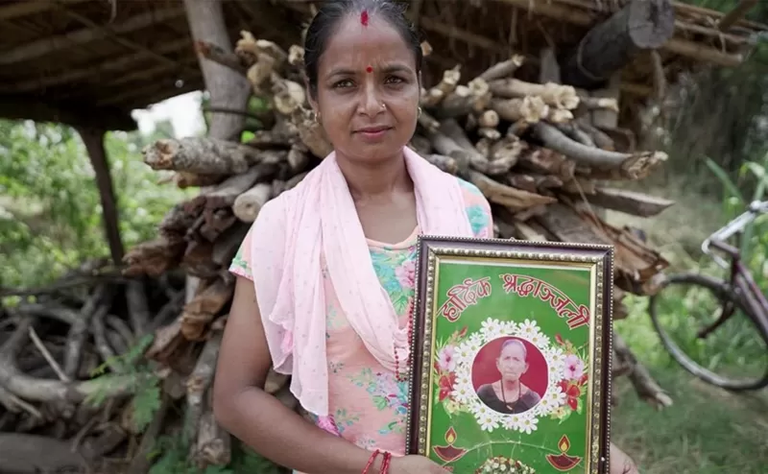 SOURCE/www.bbc.com
But the family wants a full investigation into the murder.

But after these protests, the authorities announced the extension of the fence between the park and the village to reduce contact between animals and people.

When a tiger kills a human in Nepal, it is found and captured. There are currently seven such so-called man-eating tigers in captivity.

Alternative livelihoods are being considered for people who enter the National Park for cattle grazing or other livelihood. The park authorities are thinking of training and upskilling the local people so that they can do small businesses or be involved in tourism. 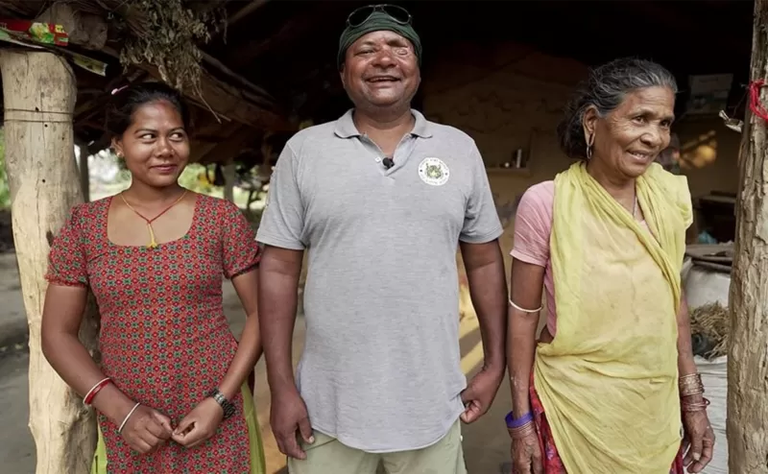 SOURCE/www.bbc.com
His team members are now trying to harden the cowsheds at home. Cows are trying to cut grass from outside fields without entering the national park to feed the goats.

Classes are being taken for the next generation to make them understand that the number of tigers in the neighboring forests is increasing and they have to adapt to this reality. Children and teenagers are being taught about tiger behavior. It is meant to prevent them from going into the forest alone.

When the children were asked the name of their favorite animal, many answered - tiger.

"I try to convince people that tigers have a right to live here too," said Vadai. "Why should only humans survive?"

news r2cornell blurtstory blurtlife bangladesh
2 months ago by rajmahamud
206.91 BLURT
3 votes
$0.60
0
Authors get paid when people like you upvote their post.
If you enjoyed what you read here, create your account today and start earning FREE BLURT!