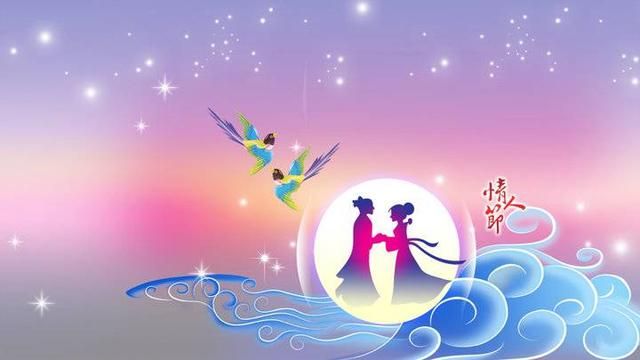 There is a popular folk story about " Qiqiao Festival ".

Zhinv, the Weaving Girl, is the granddaughter of the Queen Mother of the West, whose daily work is to weave clouds, that is, cloud brocaded heavenly clothes. The cowherd is a cowboy on earth, and his parents died early. He was abused by his brother and sister-in-law. He lived a hard life and what was accompanying him was an old cow every day.

One day, the old cow suddenly spoke to him that the Weaving Girl in the sky was going to take a bath in the river. As long as he took away the weaver girl's feather coat, she would not go back to the sky and he could marry the weaver girl.

After a few years, the old cow suddenly said to the cowherd heavily that he was going to die, so he could peel off its skin. In case of emergency in the future, it would be useful to wear it on his body. The cowherd was very sad. He peeled off the cow hide and buried the old cow on the back mountain.

The Queen Mother of the West was very angry when she learned this, so she sent heavenly soldiers to arrest the weaver girl. The cowherd just came back from working in the field and saw the weaver girl taken to the sky from a distance. Suddenly, the cowherd remembered the words of the old cow, and then he carried his children with a shoulder pole and put on the skin of the old cow. To his surprise, he could fly to the sky as soon as he put the cow hide.

The cowherd chased behind, and the weaver girl cried in front. Seeing that he was about to catch up, the Queen Mother pulled off the hairpin on her head and drew a line between the weaver girl and the cowherd. Suddenly, the Milky Way appeared, with its waves turbulent, blocking the Cowherd and the Weaver Girl.

The Cowherd and the Weaver Girl couldn't see each other across the river, only to wash their faces with tears. Later, magpies were moved by their love story, so they spontaneously built a magpie bridge for them with their bodies to let the two meet. The Queen Mother was also moved and allowed the Cowherd and the Weaver Girl to meet on July 7 of the lunar calendar every year.

From this, we can see that Altair and Vega are facing each other across the Milky way, and there are two small stars next to Altair, as if carrying a son and a daughter on a shoulder pole. Not only magpies, birds on earth also fly to the sky to build bridges on the Chinese Valentine's Day. No wonder it's difficult to see birds on this day.

Some people say that on this day, under the grape trellis, you can still hear the cries of the Cowherd and the Weaver Girl.

The Weaver Girl has a pair of skilled hands that can weave clouds. Folk girls hope to get the aura of the Weaver Girl, so on the Chinese Valentine's Day, "begging for ingenuity" makes it a festival symbolizing love, which is considered to be the most romantic traditional festival in China, and has given the cultural connotation of "Chinese Valentine's Day" in contemporary times.

Posted from https://blurtlatam.com
r2cornell instablurt blurttribe newvisionlife techclub epistem blurt iduvts travel
2 months ago by bring
389.71 BLURT
35 votes
$1.13
2
Authors get paid when people like you upvote their post.
If you enjoyed what you read here, create your account today and start earning FREE BLURT!
Sort Order:
[-]
r2cornell-curate  ·  2 months ago